My research interests and agenda are centered around gendered power in the American revolutionary era (broadly defined, c. 1750-1820), particularly the ways in which women exploit ostensible restrictions on their agency and assumptions about feminine weakness and dependence to work to their advantage. More recently, I have been exploring the ways in which intersectional identities—particularly race—alter women’s strategies, and the ways in which white women were (wittingly or unwittingly) complicit collaborators in the maintenance of a patriarchal agenda, which may have contributed to the retardation of a collective push for women’s rights.

My article entitled “Privileged in the Patriarchy: How Charleston Wives Negotiated Financial Freedom in the Early Republic” will appear in the Summer 2021 edition of The South Carolina Historical Magazine. This piece argues that elite Charlestonian women in the early republic employed rhetorical strategies in seeking marriage settlements and property rights parallel to women in different legal jurisdictions who sought divorces from their husbands. Importantly, South Carolina prohibited divorce through the twentieth century, so my findings are significant in identifying similar legal strategies utilized by white women across the early United States, despite their myriad legal inequalities. 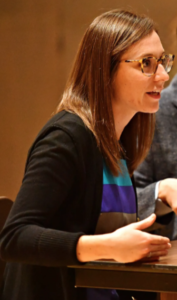 Two other projects are currently under contract for publication. The first is a chapter in a peer-reviewed edited volume, entitled Women Waging War (University of Virginia Press). My “Complicated Allegiances: Women, Politics, and Property in Post-Occupation Charleston,” grew out of my dissertation project and a conference presentation (the 2019 Annual Meeting of the Sons of the American Revolution) in the summer of 2019. This chapter argues in the wake of the British occupation of Charleston during the American Revolution, women exploited the relative fluidity of gendered comportment given the uncertainties of wartime. This period provided opportunities for women to assert political power beyond what would have normally been considered acceptable by Anglo-American standards of white femininity. This piece reflects arguments made throughout my professional work: that women’s expressions of power in this moment were often contingent upon the emphasis of their various dependencies within patriarchal society.

My book project, In Dependence: Women, Power, and the Patriarchal State in Revolutionary America, is under contract with New York University Press, and will be included in NYU Press’ “Early American Places” series (https://nyupress.org/early-american-places/). This project is based on my 2016 dissertation, which was a finalist for the Society for Historians of the Early American Republic (SHEAR) manuscript prize in 2017. In Dependence examines the myriad ways in which early American women exploited their legal, social, and economic positions of dependence, turning these constraints into vehicles of female empowerment. Based on evidence derived from extensive research in legislative petitions, divorce cases, marriage settlements, equity cases, probate records, manumission deeds, freedom suits, almshouse records, and charitable institutional files, this project focuses on women’s interactions with the state and its proxies in Boston, Philadelphia, and Charleston during the Revolutionary era—broadly defined between 1750 and 1820. Through analysis of these sources, In Dependence prioritizes women’s own view of their status under the law, rather than attempting to conceive of their status from the viewpoint of normative, male-defined conceptions of power, or even from presentist, and thus ahistorical notions about women’s power. In Dependence demonstrates that women defined their relationship with the patriarchal state—the colonial, revolutionary, and early national governments and organizations helmed by elite men—in terms of their multifaceted dependencies. Observed in this way, then, my project complicates a binary understanding of power and weakness, of agency and impotence, and of independence and dependence, forcing the reader to think about the ways in which these ideas exist on a spectrum and were contingent upon one’s place in the early American patriarchal hierarchy. Ultimately, In Dependence presents a new way to think about how the Revolution affected women, or more aptly, how these women took the terms of the Revolution and made it work for themselves.

For my next book project, I would like to investigate the link between Orientalism, patriarchal power, and the suppression of women’s rights in the early American republic. Early American women’s print culture often included nonfiction essays, images, and fictionalized narratives about life around the globe, and likewise highlighted how women in other countries and under other systems of government lived. It is my hypothesis that this reading material (which was often but not always authored by or under the supervision of men) served to placate American women and inure them to their unequal legal, economic, and social statuses in the United States by presenting comparative pictures of women suffering under the often far more restrictive patriarchal systems abroad. This line of inquiry expands my well-developed research interests studying the limits of American women’s collective action in early American history, but expands that research to a global perspective, reflecting a relatively recent historiographical turn in the literature. Additionally, I would like to start work on a digital project, mapping early American women’s emancipations and lives in freedom based on the collections of the Pennsylvania Abolition Society (PAS) that I have recently been exploring for my current book project.